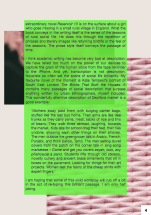 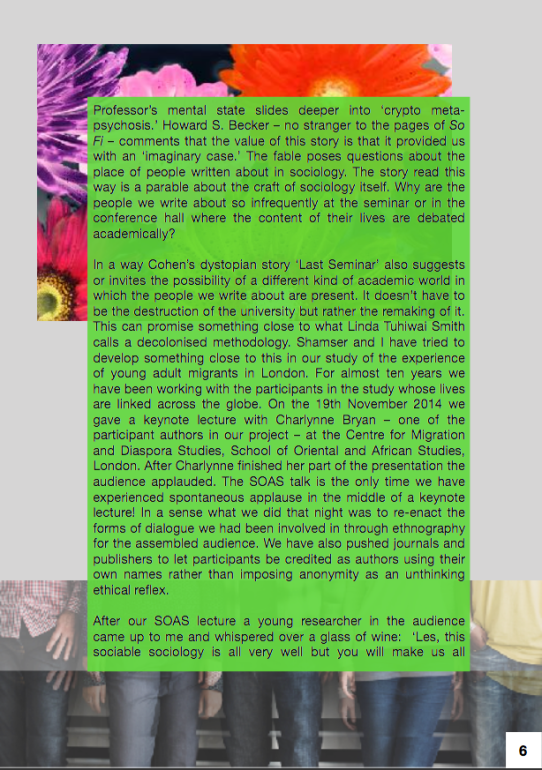 The Uses of Fiction
Les Back

As an avid reader and fan of the magazine it’s really wonderful to offer a contribution at last because So Fi bridges my love of reading novels and short stories and my work as a sociologist. A nagging doubt has stopped me offering a contribution previously. I love fiction but I have always felt I didn’t quite have the chops as a writer for fiction.

Regardless, I have worked to infuse my own attempts at writing sociology with that love of literature while arguing for a more artful way to show and tell social life. I think part of this is the realisation that even the best sociological authors like Ann Oakley and Richard Sennett end up as quite poor novelists. Of course, this need not be the fate of sociologically inspired fiction as will become clear. I want to use my own hesitation as a starting point and ask the question what are the uses of fiction sociologically speaking?

Perhaps the distinction between fiction and non-fiction is at the outset misleading. Non-fictional realities are always assembled through the artifice of writing. They are ‘true fictions’ that require the conventions and structures of language to mediate them. Always selective facsimiles of social life, they are manufactured through the rattling blows on the keyboard by the fingers of fallible authors. In writing we perform the fiction of taking our readers to the things we have seen, the voices we have listened to and the places we have sensed and made sense of.

So the first thing that I want to argue that is useful about fiction is it makes us more attentive to literary form in the communication of our arguments. Novelists in particular have much to teach us about the way the style of storytelling conveys the points of the story itself. Jon McGregor’s extraordinary novel Reservoir 13 is on the surface about a girl who goes missing in a small rural village in England. What the book conveys in the writing itself is the sense of the seasons of rural social life. He does this through the repetition of phrases and literary images like returning birdlife or the feel of the seasons. The prose style itself conveys the passage of time.

I think academic writing has become very bad at description. We have relied too much on the power of our devices to capture the grain of the human voice from the tape recorder to the iPhone. And yet, transcription is not description. Novelists so often set the scene of social life brilliantly. My favourite novel of the moment is Kate Tempest’s portrait of South East London The Bricks That Built the Houses. It contains many passages of social description that surpass anything written by urban ethnographers, myself included. This wonderfully attentive description of Deptford market is a good example:

‘Mothers sway past them with bulging carrier bags, stuffed like the last bus home. Their arms are like tree trunks as they carry yams, meat, sacks of rice and tins of beans. They walk three abreast, laughing, towards the market. Kids late for school drag their feet, their ties undone, showing each other things on their phones. The men outside the greengrocer talk in Arabic, French, Punjabi, and thick patois, Tamil. The men selling duvet covers from the patch on the corner talk in sing-song marketese – Come and get you covers eeyah, look, any pillahcayse a pand. Students rifle through old stereos, novelty cutlery and ancient brass ornaments that sit in boxes on the pavement. Looking for things for their art projects. Women test the fabric of the cheap shirts with expert fingers.’

I am hoping that some of this vivid wordplay will rub off a bit in the act of re-typing this brilliant passage. I am only half joking.

The other thing that I think I find useful in fictional writing is the power of characterisation and portraiture. How often the voices of people in research papers read like disembodied respondents that are not placed by the research writer in the social scene of their lives. It seems to me that fictional characterisations like Becky, Harry and Leon in Kate Tempest’s novel seem much more believable in comparison. The other thing that I have tried to do inspired by fiction is to think about the sequencing of the portraits of the people in a book so that it conveys a sense of a life unfolding through time. Shamser Sinha and I’s forthcoming book Migrant City is an attempt to tell the story of London through the eyes of thirty young migrants over the course of 10 years. Its form is very much inspired by my love of fiction but also Shamser’s experience as a writer of plays in addition to being a sociologist.

So far I have argued that fiction is a useful literary hinterland to inspire us to be more artful in our sociological writing. There are brilliant examples of sociological fiction too. In this case the fiction seems to offer a different kind of resource. A good example of this is Yasmin Gunaratnam’s extraordinary sociology poetry that represents the migrant experience of end of life in ways that transcend conventional sociological prose. Sometimes they are even published in sociological journals.

Stan Cohen sociological fable ‘The Last Seminar’ was published in the journal The Sociological Review in 1979. In the introductory prelude to the story Cohen toys with the distinction between fiction and fact. He writes: ‘Readers of this journal will no doubt take the following narrative to be a work of fiction, a “short story”. In fact, though, the text represents a true account, as told to me by Professor ——–, a sociologist well known to the readers of the Sociological Review.’ The story is an academic nightmare in which a professor starts to see the empirical ghosts of all the subjects who are represented in the pages of his curriculum. Campus falls into chaos as the Professor’s mental state slides deeper into ‘crypto meta-psychosis.’ Howard S. Becker – no stranger to the pages of So Fi – comments that the value of this story is that it provided us with an ‘imaginary case.’ The fable poses questions about the place of people written about in sociology. The story read this way is a parable about the craft of sociology itself. Why are the people we write about so infrequently at the seminar or in the conference hall where the content of their lives are debated academically?

In a way Cohen’s dystopian story ‘Last Seminar’ also suggests or invites the possibility of a different kind of academic world in which the people we write about are present. It doesn’t have to be the destruction of the university but rather the remaking of it. This can promise something close to what Linda Tuhiwai Smith calls a decolonised methodology. Shamser and I have tried to develop something close to this in our study of the experience of young adult migrants in London. For almost ten years we have been working with the participants in the study whose lives are linked across the globe. On the 19th November 2014 we gave a keynote lecture with Charlynne Bryan – one of the participant authors in our project – at the Centre for Migration and Diaspora Studies, School of Oriental and African Studies, London. After Charlynne finished her part of the presentation the audience applauded. The SOAS talk is the only time we have experienced spontaneous applause in the middle of a keynote lecture! In a sense what we did that night was to re-enact the forms of dialogue we had been involved in through ethnography for the assembled audience. We have also pushed journals and publishers to let participants be credited as authors using their own names rather than imposing anonymity as an unthinking ethical reflex.

After our SOAS lecture a young researcher in the audience came up to me and whispered over a glass of wine: ‘Les, this sociable sociology is all very well but you will make us all unemployed!’ I said in response that it is a risk worth taking. Our experience of experimenting with dialogic research enabled insights to come into view that had been hidden within our blind field. Also, our participants do not want us to surrender our expertise. We found quite the reverse. What they wanted was to bring our erudition and overview into dialogue with their own hunches and insights, in a spirit of trust and mutual respect.

I may never write fiction in the strict sense of the meaning of the word. But all my writing is inspired by reading it both in terms of form and structure. Novels have been my constant reading companions in an attempt to make sociology more artful and my own attempts furnish it with images of social life that live in vivid impressions in the reader’s mind.

Les Back is a Professor of Sociology at Goldsmiths, University of London. His recent works include Academic Diary: Or Why Higher Education Still Matters (2016) and The Art of Listening (2007). His forthcoming book with Shamser Sinha, Migrant City, is an innovative collaborative ethnography that tells a story of contemporary London through the eyes of thirty adult migrants and two sociologists.

This editorial appeared in Edition #3 of So Fi Zine.