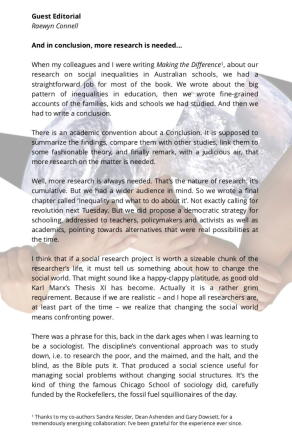 And in conclusion, more research is needed…

When my colleagues and I were writing Making the Difference1, about our research on social inequalities in Australian schools, we had a straightforward job for most of the book. We wrote about the big pattern of inequalities in education, then we wrote fine-grained accounts of the families, kids and schools we had studied. And then we had to write a conclusion.

There is an academic convention about a Conclusion. It is supposed to summarize the findings, compare them with other studies, link them to some fashionable theory, and finally remark, with a judicious air, that more research on the matter is needed.

Well, more research is always needed. That’s the nature of research: it’s cumulative. But we had a wider audience in mind. So we wrote a final chapter called ‘Inequality and what to do about it’. Not exactly calling for revolution next Tuesday. But we did propose a democratic strategy for schooling, addressed to teachers, policymakers and activists as well as academics, pointing towards alternatives that were real possibilities at the time.

I think that if a social research project is worth a sizeable chunk of the researcher’s life, it must tell us something about how to change the social world. That might sound like a happy-clappy platitude, as good old Karl Marx’s Thesis XI has become. Actually it is a rather grim requirement. Because if we are realistic – and I hope all researchers are, at least part of the time – we realize that changing the social world means confronting power.

There was a phrase for this, back in the dark ages when I was learning to be a sociologist. The discipline’s conventional approach was to study down, i.e. to research the poor, and the maimed, and the halt, and the blind, as the Bible puts it. That produced a social science useful for managing social problems without changing social structures. It’s the kind of thing the famous Chicago School of sociology did, carefully funded by the Rockefellers, the fossil fuel squillionaires of the day.

By contrast, radicals wanted to study up – to investigate groups more powerful than we were: i.e. the ruling classes, the state, the military and the corporations, including the Rockefellers. That, we hoped, would produce knowledge relevant to structural change.

It’s a strategy I’ve tried to follow in different domains. It led me to study the ruling class in Australian capitalism, and power elites on a world scale; to study men and masculinities in order to understand power in gender relations; and to study global-North knowledge institutions, as well as Southern theory, to understand the global economy of knowledge.

This kind of work assumes that major social structures can change through social action: that there are always alternatives within reach. I think of social process as inherently creative. Social practices never simply reproduce social structures. (That’s my objection to social reproduction and equilibrium theories whether from Parsons, Bourdieu, or neoclassical economics.) Social practices address historically-created situations and transform them through time.

The best account of this I know is in a forgotten book by the Czech philosopher Karel Kosík, Dialectics of the Concrete. Kosík wrote it when trying to get his head around the weird situation of Marxism in eastern Europe under Soviet occupation, a new kind of colonialism. He recognized that social change may be in an alienated mode, not just in a revolutionary mode. He coined the  term ‘ontoformativity’ for the world-making character of human activity. I think that’s a useful corrective both to the pessimism of reproduction theory, and to the short-term optimism of ‘performativity.’

This applies to sociological research itself. When we do research, one thing we have to do is address the current state of knowledge. Hence that demand to write a ‘Review of the Literature,’ that so many graduate students puzzle over. The Literature defines the historical situation in knowledge that your research project is about to transform2.

Transforming the state of knowledge is the creativity of the labour that we do in research. We are producing an alternative state of knowledge. Creativity is not an optional add-on to social science. It’s of the essence. Therefore anything that stirs imagination, reaching beyond the given, is good. There are no rules for this. If you can get inspiration from seeing moored yachts in the wind, watching a senior cop at work, or sighing in a freeway traffic jam, then do it! Have a look at my poems in this edition of So Fi Zine. You may or may not care for them as poetry – it is your sovereign right to criticize! – but I hope you can detect the structures of social relations that are at work in each one.

A researcher then has to make it good – which means, show that the inspiration works, that the seams you have sewn are straight, the bricks you have laid are firm. This is because the making of knowledge in sociology (and any other science, need I say?) is a collective process. The knowledge cannot be uniquely yours: it has to work for other people too.

Hence the requirement to publish what you find out. This has become terribly distorted in current academic life by predatory publishers, mad managers and lunatic ‘league tables.’ Think expansively. Our Making the Difference study, as well as journal articles and a couple of books, also produced articles in teachers’ magazines, workshops at teachers’ professional development events, talks to parents, talks on radio, an illustrated pamphlet, a video documentary (not too common in the 1980s), consultations with unions, and discussions with policymakers.

A large part of what sociologists collectively do is teaching. And despite all the textbooks, MOOCs and online course templates, teaching too is a creative process. Supervising a PhD is a particularly slow form of teaching, but it shows this point very clearly. The supervisor’s basic task is not ‘knowledge transfer.’ It is to help the student move into the zone of proximal development (as Lev Vygotsky called it) just beyond their current know-how. This is the zone where the student’s own agency can develop new capacities. The supervisor has to link that process in the student’s learning with a path forward in the researchable zone just beyond current collective knowledge – to help the student identify the alternatives in knowledge that emerge from their research.

The theme of this edition is ‘alternatives.’ I’m arguing that alternatives don’t exist only out there, in utopias or programmes. They also exist in here, in the way we conduct our day-to-day lives, relationships, learning and labour.

Radicals used to talk about ‘prefigurative politics,’ or ‘living your politics’: enacting here and now the kind of social relations you hope to create in the long run. That’s not easy, in the formal, controlled environment of public higher education, where I have worked most of my life. But it has been my intention. I hope some of it has worked.

1 Thanks to my co-authors Sandra Kessler, Dean Ashenden and Gary Dowsett, for a tremendously energising collaboration: I’ve been grateful for the experience ever since.

2 Forgive the advertisement, but if anyone wants to explore this view of research and teaching, it’s in my book The Good University, to be published in February 2019.

This editorial appeared in Edition #4 of So Fi Zine.